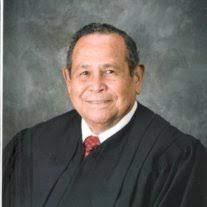 Judge Oscar De La Fuente Sr. was born in San Benito, Texas, July 8, 1929. He attended Fred Booth Elementary and graduated from San Benito High School in 1950. Upon graduating from high school, he answered his country’s call to duty and took part in the Korea War. He saw active duty as a tank commander with the 224 Regiment 40th Division, earning his combat infantry badge. He was honorably discharged in 1953 as a sergeant.

After fulfilling his military obligations, he worked at Wilson’s Supermarket and later went into business with his brother, Joe. They opened Joe and Oscar’s Food Store in 1962 and operated the store for 32 years.

Judge De La Fuente began his duty as a public servant in 1972, when he was first elected to the San Benito CISD Board of Trustees. He served on the board for a 12-year period. He served as president for five years and was the first Hispanic elected to serve as President of the San Benito CISD Board of Trustees in 1974. He continued serving as the president in 1975, 1976, 1977, and again, in 1980.

He is especially proud of his service on the board, realizing its importance and seeing that the children of the San Benito area receive a first rate education to ensure their future.

Judge De La Fuente was elected to serve as a Justice of the Peace in 1984, an office he held until his retirement at the end of 2004. He is a member of the St. Theresa Catholic Church, Knights of Columbus, Kiwanis Club, and Catholic War Veterans.

He and his wife, Anna, have been married for 47 years and have three grown children, Oscar Jr., Dolores McCanna, and the late Carlos Rene, and six grandchildren. The retired judge has continued to keep an active interest in the schools where his children once attended. He is extremely proud that several of his grandchildren now attend San Benito Schools.